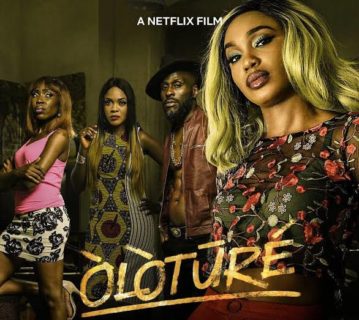 Oloture is a 2019 movie about a journalist who went undercover as a prostitute to expose human trafficking but she only finds a world of exploited women, murder and ruthless violence. This movie became one of the most viewed just after days of its release on Netflix.

The controversy around this movie is that Tobore Ovuorie, a journalist who worked with Premium Times claimed that the movie was her true life story.  According to her, Mo Abudu, the CEO of Ebony Life TV and owner of the film stole her story that happened live in 2014 and even though she was a friend to Abudu, Ovuorie said she wouldn’t be in a copyright infringement war with Mo Abudu, the filmmaker if she was given full disclosure about the movie “Oloture” from the beginning.

On the other hand, Abudu has narrated and maintained that the film “Oloture’” is a work of fiction inspired by a variety of true stories, one of which is Ovuorie’s 2014 investigative story. In a speech she gave on her Instagram page, Abudu said she had earlier reached out to the publishers of Premium Times, Ovuorie’s employers as of when the story was made and obtained full permission to make the film. She also reached out to the reporter, Tobore Ovuorie to acknowledge her by granting her a private screening of the movie, gave her a special mention at the end of the movie, interviewed her in “Moments with Mo” and promised her a 5%  proceeds from its theatre run.

Abudu stated that Tobore Ovurie wrote the article titled ‘Inside Nigeria’s Ruthless Human Trafficking Mafia’, which was published on August 12, 2014, by the Premium Times, her employer at the time. According to the Premium Times Editor-in-chief, only the media company and their partner on that project, Zam Chronicles, can lay claim to the copyright of that report based on Nigeria’s copyright law.

“We sought and obtained the rights from Premium Times, the owners of the story. As such, we fulfilled our legal obligations and do not take kindly to suggestions stating otherwise. There are several instances where we have acquired the rights to books, stories, and places such as ‘Queen Hunter’ ‘Death of the Kings Horsemen’, and ‘The Secret Lives of Baba Segi’s Wives’. This is how our industry works. We dare not make a film without acquiring rights.” Abudu added. 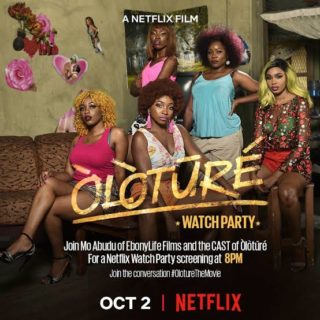 However, Ovuorie maintained that her story was stolen. In a statement, she said that Abudu did not give her full disclosure about the movie ‘Oloture’, which she described as a 70% replica of her 2014 investigation on human/sex trafficking. She also dismissed the claims that Abudu had obtained legal rights from Premium Times, her former employers, stating that her investigation was before her employment by the media firm.

“It is disheartening that Aunty Mo could mention that she got the right to my life-story from my ex-employer. I am in shock that she would claim that I was contacted prior to the movie in one breath and in another that the story is not about me but about several other faceless journalists who had done what I did but did not publish experiences”.

“If Ebonylife had given me full disclosure from the beginning, we would not be where we are, at this point. Oloture is an adaptation of my work and life-story. I experienced the investigation, the process, and the risks, upon which the movie is based. I also single-handedly authored the publication the movie relied on.” Tobore stated.

“The making of a film on exploitation should not itself be exploitative. I almost died (and I saw death) when I took a 7-month long journey to investigate human trafficking. Now, I am going through the ordeal a second time watching my life story on TV, without full credit or compensation, and the subsequent campaign of calumny.” She said to The Cable.

Tobore demanded $5 million and asked Abudu to immediately include proper open and end credits in the movie acknowledging the adaptation of her work in line with movie industry standards and practices and to refrain from further “exploitation” of the 2014 story.

Abudu concluded by saying that they will not be intimated by anyone. However, “our doors are always open to have a conversation that is open and right. Anything else will be refuted  and if necessary settled in the court of law”.

Rate this item: 0
PrevPreviousSee This Chicama’s Red Dress That Had Us Thinking About 14th February.
NextNigerian Footwear Brands to Love and Rock in 2021Next