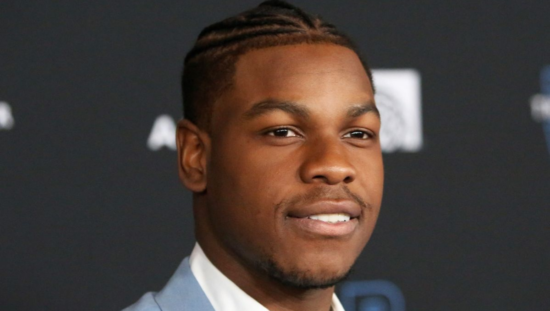 Boyega, took to his Twitter handle to announce the split explaining that Jo Malone reshot an ad that he made with them and replaced him with a Chinese actor.

The personal video, which the actor made in his London home was reshot for the Chinese market.

Although the company apologised for what it described as a “misstep” that caused “offence”, Boyega still stated that the company was wrong to have used another actor without his consent or prior notice. 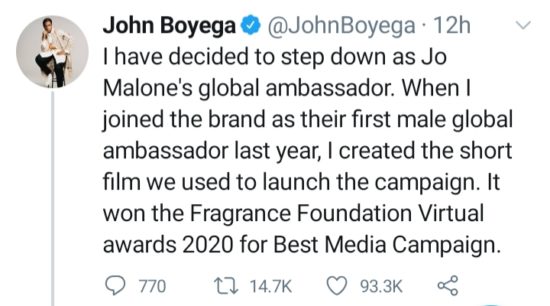 Boyega further said that while he accepted that companies would use different representatives around the world, “dismissively trading out one’s culture this way, is not something I can condone”

According to him, ” The film celebrated my personal story, showcasing my hometown including my friends and featuring my family”

He seemingly channelled his inner Nigerian when he stated that “I don’t have time for nonsense”.

Jo Malone has since removed the advert from its campaign in China. They released a statement stating that they ” deeply apologise for what, on our end was a mistake in the local execution of the John Boyega campaign”

John Boyega’s sister, Grace in a response on twitter said “this misstep will be taken seriously”.

This is not the first time that John Boyega has been sidelined to appease the Asian audience.

When he starred in Star Wars: The Force Awakens, the movie poster was remade for China and his new lead character, Finn, was shrunken in size in order to appeal to the Asian audience.

Earlier this month in a speech for Black Lives Matter, the actor called for an end to “Black actors being pushed to the side”.

This seems like a battle that Boyega is determined to fight to the end and his consistency is commendable.